Christmas in Costa Rica in that Special "Tico" Style! 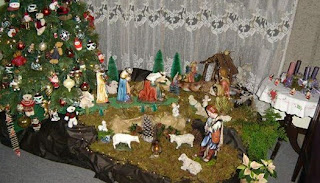 In case you haven´t noticed, Costa Rica Christmas decorations and discount sales began long before Halloween dates passed. This brings to mind some of our own special ¨Tico¨ Christmas traditions found in our beautiful tropical locale. Be it the kids that start their ¨summer¨ vacations in December, workers that receive their yearly ¨aguinaldo¨ (an automatic one month salary Christmas Bonus from their boss), or the massive preparations of the traditional Christmas Tamales……whichever it may be, ¨La Navidad¨ is just around the corner!

Will there be snow? Well that is highly unlikely since Costa Rica is located only 11° off the Equator, but Costa Ricans are fascinated by snow, since few have ever 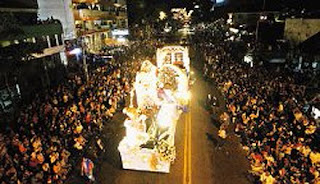 seen the real thing. Many of the floats in the yearly ¨Festival de la Luz¨ which passes each year down the main street of Paseo Colon and Second Ave in San Jose, are decorated in fluffy white cotton fabrics to give the impression of snow, and many holiday participants threw white confetti at each other, also meant to simulate snow. This year, the municipality once again is put a firm hand down on the throwing of this confetti due to safety factors, as well as the high cost of clean-up afterwards. In years past, there have been many complaints from innocent bypassers walking to work who were suddenly blanketed from head to toe in the white confetti. 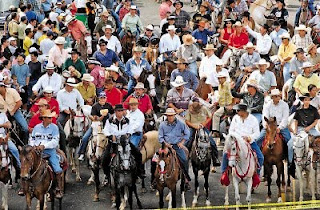 clowns and other strange characters, but is most popular for featuring some 6000 of Costa Rica´s most beautiful high stepping horses, as well as the famous colorful hand painted oxcarts. These fabulous detailed oxcarts were originally pulled by people, then by oxen, and now are rarely used in day to day work, but are considered historical works of art cherished by the Costa Rican people. 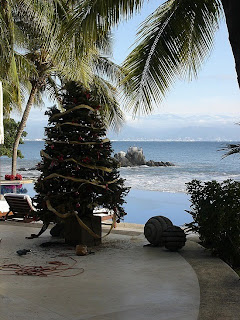 white and maybe a little red, is accompanied by another important decoration, the ¨Portal¨. The Portal is the representation of the birth of Jesus, with the figures of Mary, Joseph, the three wise men, the ox and the mule. The most important figure in Costa Rica is the Baby Jesus. In Costa Rica, Santa Claus doesn't bring the Christmas gifts, those are brought by Baby Jesus on Christmas Eve. Called ¨La Nochebuena", it is said that while the family is sleeping, the Baby Jesus appears at the portal and the gifts magically appear under the tree for the morning of the 25th. That is when all family members typically gather around the tree and pray, thanking Baby Jesus for all the good that has passed that year, followed by the opening of the gifts Baby Jesus has bestowed upon them.

The Christmas menu is extensive, but the focus is around the preparing and eating of typical Costa Rican "tamales". The true "tamal" base is of ground corn, which is 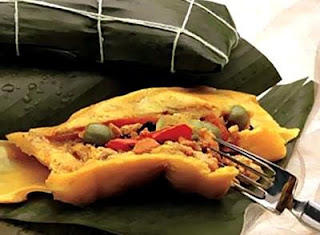 made into a thick dough that is later filled with small amounts of rice, small slices of potatoes, vegetables, green olives, pork or chicken, and finally wrapped in fresh plantain leaves. They are then tied with string in pairs (known as ¨Piñas¨) and boiled until cooked through and through. Making "tamales" is a cherished tradition that involves the participation of many family members and friends, as this is a slow and laborious process taught by Grandmothers from one generation to another. I am lucky enough to have many Tico friends that take pity on my lack of knowledge (or motivation!) to make the tamales and each year give me the gift of the famous Tamal!

Easily, the most chaotic and perhaps crazy activity of the holiday season is the "Zapote Bullfights", held in the town of Zapote, just outside of downtown San 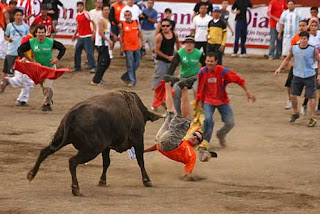 Jose. It is there that they build a special ¨Redondel¨ or Bull Ring, as well as erect a yearly improvised amusement park complete with carnival rides, amusement park games and a selection of "chinamos", or improvised food stands. It´s important to note that in the Costa Rican bullfights, the bulls are never harmed, or killed, though the “bullfighters” do not always fare so well (see videos below). The most prestigious cattle ranches provide the bulls for free and it is considered an honor to have their bulls included in this event. Beyond the actual riding of the large bulls (generally done in Costa Rica with NO hands), much more frightening are the bullfighters in the ring. These consist of ¨normal¨ people dressed in all kinds of crazy outfits, that willingly get into the arena in mass without any professional preparation to ¨fight¨ or spook the bulls, encouraging them to chase them around the arena. Incredibly, very few people get hurt or gored during this event, though the activity is definitely entertaining and a big headache for the local Red Cross which voluntarily provides it's emergency services during this yearly event. It´s interesting to note that this festival year after year draws Costa Ricans from all parts of the country and crosses all social classes.

The Holiday Season then officially ends on January 6th, the day the three wise men arrived and saw Baby Jesus for the first time. That day all the neighbors gather and say a special prayer for the Baby Jesus. This prayer is based on the rosary and traditional Christmas carols. Of course after the prayer, there's the indulging in 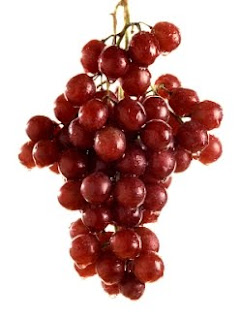 the famous Costa Rica coffee, along with more "Tamales", "Rompope" (Costa Rican Egg Nog), "Aguadulce" (a Sweet Water like juice) and all kinds of typical baked goods and other traditional beverages. Don´t forget the grapes (no seedless ones here) and the apples, which are considered very special treats here, as they are not readily available or very affordable and kids love them!

Lastly, Costa Rican Hotels and tourism operations around the country eagerly await the arrival of December to usher in their peak tourist season when winter weary snowbirds look to bask in the warm tropical weather and waters of Costa Rica, as well as enjoy the bounty of adventure tours and the beauty of Costa Rica´s incredible natural resources. I hope if you are reading this you are lucky enough to share in our bounty this Holiday Season!

Author: Kimberly Barron, originally from Malibu, California has lived in Parismina and Manuel Antonio, Costa Rica for 20 years. Starting as a certified tour guide, she spent another 15 years managing fishing lodges on the Caribbean Coast and later 4* & 5* Hotels on the Pacific Coast of Costa Rica. Currently semi-retired, Kimberly still works as the Marketing Director for Byblos Resort & Casino and Hotel Makanda by the Sea.
Posted by EyeOnCostaRica at 5:16 AM 6 comments: Links to this post 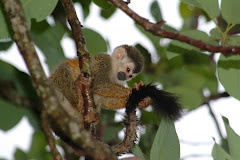